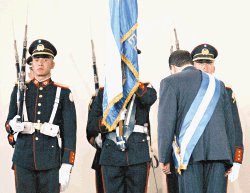 Saca bows to the Salvadoran flag, an act of protocol he almost forgot, reports La Prensa Gráfica, which also noted Hermano Tobi's remark that "governing authorities are put in their posts by God."

I won't comment on the pomp and circumstance of yesterday's inauguration of Tony Saca, the beginning of what will end up being a 20-year reign (1989-2009) of the ARENA party in the executive branch. Instead, a few random points of interest:

The latest IUDOP poll notes that outgoing president Francisco Flores leaves office with the highest popularity rating ever of any past ARENA president, even higher than the "peace" president, Alfredo Cristiani. In part, he's riding the coat tails of Saca, around whom there are great expectations.

But when asked what the biggest accomplishment of the Flores presidency had been, roads and highways were noted by about half those polled, while just under 20% mentioned the fight against crime as his best achievement. What's left to do? A slew of issues related to unemployment and the economy. I wonder if all those new roads have anything to do with the tripling of the public debt in recent years?

On that score, it's interesting to note that the new Economy Minister, Yolanda Mayora, gave an interview to El Diario de Hoy yesterday which demonstrates that the new government is already hedging its bets on CAFTA and free trade agreements. "The FTA [Free Trade Agreement] is not the strategy" reads the headline of the interview, in which she notes that free trade is fundamental, and she's optimistic about it's approval, but that it's only one part of a larger strategy.

The FMLN, of course, held it's own meeting in the Civic Plaza downtown, and only a very few of their ranks attended the official ceremonies (a representative from the San Salvador municipality, outgoing TSE magistrate Julio Hernandez, the mayor of Nejapa). La Prensa Gráfica, for one, acknowledges that there is a change of discourse in the FMLN from one of relentless war to concertación (consensus-building). The FMLN published full-page ads yesterday of its "Proposal for National Concertación," hoping to move towards a debate on the issues rather than all-out struggle. You can see that in various interviews with FMLN leaders, and one can only hope that this is a good omen.

But while obeying the dictates...er, the wishes, of the FMLN leadership, for the first time the reformist wing of the party bowed out of the official meeting, and instead joined in with various social movements that marched to protest government policies. Asked if this might represent the beginning of a structured internal opposition, Hugo Martínez replied, "you might get that impression."

Finally, in the past few days, the papers have been rife with interviews of new cabinet ministers. I have to comment on the new 30-year-old head of CONCULTURA, the chronically underfunded state agency that supports the arts. Federico Hernandez, who was just elected last year as an ARENA deputy, will take over this post. He admits that he can't remember the last time he went to an art exhibit, likes to sing karaoke (he says no one's told him he has a bad voice), and enjoys ranchera music more than any other genre. Sounds like the perfect man for the job!
Posted by David at 6:08 AM

I work for the Latin America Program of the Open Society Foundations, based in Washington, DC. This blog was more active in 2004-2005, when I was based in El Salvador.
The views expressed here are personal, and in no way represent the views of OSF.